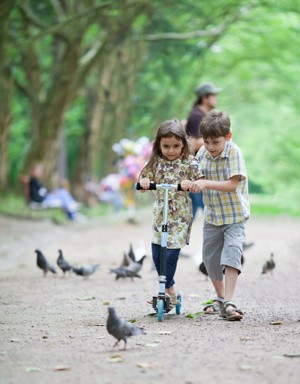 When a Sibling Supports

My younger brother Terry, who was born when I was 16, lived with my mother in Florida for most of his adult life. I didn’t see them much due to living out-of-state, going to college and starting married life with my husband. I didn’t know that he had developmental issues until I got a call from a nurse in Florida telling me that our mother was in the hospital and the staff was concerned because he hadn’t left the hospital, showered, or changed clothes in three days.

They didn’t think he had eaten. I went down to be with them, and my mother died soon after. When I went to the mobile home where they had been living I had to throw everything out because it was such a mess.

Terry went to live with my other brother, who had unrealistic expectations and ended up kicking him out. My husband and I told him that we would take him in under the condition that he learn some basic skills. We knew what to expect, because my husband also has a mentally challenged sister that we had sheltered for five years before moving her to a group home where she could be among more people while we worked.

I had just retired from the Tennessee Department of Education and planned to be a substitute teacher when Terry came to live with us. After much conversation with my family, Terry and I decided to apply for and did receive support to serve as Terry’s teacher. He had been completely dependent on my mother, and hadn’t learned any life skills. My 40-year-old brother was developmentally about 11 years old. He had trouble with very basic things like personal hygiene, fixing meals, picking clothes that matched, doing laundry, communication or going to the bank. He had never been through a drive- through restaurant and indicated he had never had a social life. There were no organizational skills whatsoever. Things you and I take for granted, Terry was learning for the first time. I wanted to help him with that.

Terry was a willing learner, and was soon taking care of personal grooming. He hadn’t really held a full-time job, so my husband and I applied for and received admission for Terry to Tennessee Rehabilitation Center. They found that he did well in the dietary area. Upon graduation he got a job in food service at Maybelle Carter Retirement Community. He can drive himself, but had to learn to pay attention to the time so he could arrive on schedule. His co-workers love him because he is a hard worker with a sweet disposition.

As part of our work together as teacher and student, we sit down once a year and make goals for learning and having fun. He really wanted to live in his own apartment, so we found a government subsidized unit nearby. I taught him how to clean house and use a microwave for simple meals. We have learned to use a calendar to note important events and times he must pay his few bills. We chose a small neighborhood bank for him, andintroduced ourselves to the tellers so they would know and help him when he came in to make a deposit. We balance all of this “official business” with trips to the mall, movies or other fun outings that he helps to choose. Despite a lot of tutoring over time, he is terrible at math, and remains vulnerable in that area. Our agreement is that he calls me each morning to tell me how he is doing, what he has eaten and how things are going at work.He understands that this daily contact allows me to head off any potential problems he may encounter.

We are working on his communication skills. Each day we read articles in the paper together and talk about current events so he can make small talk with others. He is a pretty good reader, but doesn’t always comprehend what he’s read. He is also a little afraid that he’ll press the wrong button on a computer, but we persist in developing basic computer skills. He is amazed at the information he can see on a computer and would like to learn more. We keep approaching the subject of math from new angles to try to build those important skills.

There is one area where Terry excels: he is a wonderful artist. He especially likes sketching landscapes and cartoon caricatures. Terry shines when he gets praise for it, and one of his biggest moments this year was when my granddaughter – age 10 – asked for arts supplies for Christmas because she wanted to pursue art like her Uncle Terry! He was thrilled to be a role model to someone. He loves being around all of my grandchildren, playing with them and learning from them on a closer peer-to-peer level.

In many ways, Terry has made remarkable progress. He goes to a Sunday School class for adults, and decided that he wanted to take a turn teaching the Bible lesson. At first I was going to approach the teacher and explain why he couldn’t possibly handle this task, but I realized that if he wanted to try it, he should give it a try. I put his lesson together, and we put his comments on cards. Over a two week period we practiced and rehearsed reading slowly and pausing to look up at the class. I am not sure which of us was more pleased and proud when he followed through with it and received praise from everyone in the class for his work. He was glowing.

I know from experience that you need to enlist a lot of people to play roles in keeping someone like Terry safe and productively engaged with the world. There are the co-workers who teach job skills; the tellers who say “Hello” and oversee his transactions; my daughter the Nurse Practitioner who is helping him understand how to care for himself when he’s sick; my grandchildren who patiently teach him new things; my husband who makes connections on his behalf; his aunt and uncle who take him on vacation every year, and certainly the people at Meridian Services, who take care of the paperwork for us and are always there as resources.

I know that my mother would be amazed that Terry has his own apartment, has a job, and is making a lot of independent decisions. For two years in a row, Terry’s well-kept apartment has been picked to be the showplace for the government inspectors! We have a lot of work to do together to make him more self-sufficient, but he is living his dream to be independent and seems happy with his life.