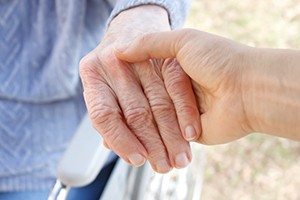 I was a caretaker to a woman who had been physically fit when she was a child, but as an adult had lost spasticity in her muscles and was a quadriplegic. A friend recommended that I look at the position, but I had never been a personal care assistant (PCA) before, and I didn’t have much experience in the medical field. I got the job, and it was more overwhelming than I thought it would be. But I was determined to learn and to build a connection with someone.

I worked with another person, because it was a two-person task to get her out of bed or to bathe her. At first, I was focused on learning, and conscious of the fact that the other, more experienced workers who were teaching me wondered how long I would be staying. My learning curve seemed steep. While there were some routines, the care that we were giving changed a little every time, and it was a challenge to keep up with that when I was learning. It hurt to hear my fellow PCA’s doubt my abilities, but I stuck with it. Eventually I was teaching other workers who had less experience than me.

During that learning period, my relationship with her was difficult. She was impatient and let me know that I was too slow, or “not doing it right.” Her frustration was heavy in the air, but I certainly didn’t blame her for that. She had been an athlete and a communicator, and it was taken from her at an age when most of us were celebrating the chance to be independent for the first time. She was the opposite. She felt trapped in her body and had to fight for her independence, and her health deteriorated rapidly as she got older.

Over time, my job skills improved and I got to know and like her. It turned out that we had similar outlooks on many things. We were both big advocates for social change, particularly when it came to advocating for the rights of people with disabilities. She went to conferences and talked to people about having the right to say “NO” to something you didn’t want from a caregiver or a family member. I thought that was brave, and felt like she was teaching me to be that direct, too. I probably wouldn’t have done that without her encouragement.

She was alone a lot, and would sometimes call me in the middle of the night because she couldn’t get comfortable in bed and needed help moving. I lived close by, so I would walk over. We had developed a friendship, and sometimes I would go over to watch movies with her, too. She told me about the challenges of being a quadriplegic. Among them: being lonely. She said that she admired and appreciated my optimism, because she had gotten very pessimistic as she got older. I thought she had pretty good reason to be pessimistic. Her family wasn’t far away, but they didn’t come to see her and made no efforts to include her. The emotional distance from them was a source of deep sadness. She was a really strong person who dealt with a lot of pain, both physically and emotionally.

During the last few years of her life she had been hospitalized several times, but always bounced back and returned to her apartment. She wanted to be as independent as possible. At the end of last year, she went to the hospital and didn’t come back. I heard she had been in a coma, and then that she had died. It was very, very hard, and I mourned her death because – despite her disability – she was such a powerful presence, and we had become friends. For weeks after her funeral I felt like I needed to go over to her apartment to take care of her. That was hard to get past.