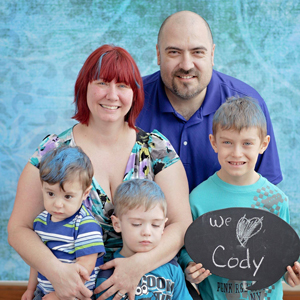 My son Cody, who is going to be six in January, has a rare genetic chromosome disorder called Isodicentric Chromosome 15, or IDIC15 for short. We got the diagnosis when he was 15 months old, but how we got there is a story that will probably be somewhat familiar to other parents. In our case, we were in Green Bay for my grandfather’s funeral in Fall of 2009, and at one of the family gatherings an Aunt urged me to take Cody to the doctor because he was ten months old and not yet sitting up on his own. My husband Damian and I have another son, Logan, who is 17 months older than Cody, but we were determined not to compare the two boys knowing that it could create unfair comparisons. We knew Cody was taking longer to do things than Logan, but he looked fine and we assumed he would probably be on a slightly different track. However, I took my aunt’s concern to heart.

I took Cody to our pediatrician when we returned home to Minnesota, and she confirmed that he was, in fact, developmentally delayed. While that triggered the school district’s early childhood assistance, I felt driven to find out why that delay happened. Were we doing all that we could for him?

We took Cody to all kinds of specialists to make sure we were on the right path: an ENT, nutritionist, and a neurologist, among others. It was the neurologist who did a chromosome study and told us about the IDIC15 disorder. He has an extra 15th chromosome, much like an extra 21st chromosome produces Down Syndrome in other children. We found out then, and know now, that he will always have a severely delayed cognitive ability much younger than his actual age. We were also genetically tested and found his extra chromosome was a random one-in-a-million chance. That gave us the go-ahead to have more children after Cody, and we’ve since added two more to our family.

Of course we wanted to do our best for Cody, and I started to figure out how all of the support systems worked, including grants, and public and private supports. No one says “Hey, this is what you should do if you have a child with a disability.” But I wish they had. Most helpful was talking to friends who had children or acquaintances with children who had disabilities.

Dakota County used to do an annual overnight retreat for parents of special needs children. My husband and I made a lot of friends that we still talk to, even though the funding for that program was pulled recently and the event was discontinued. It’s too bad, because the gathering made it easy to find resources among the attendees, vendors and speakers, and allowed us to be a resource to others who were not as far down the path with their issues.

Friends who understand your challenges are so important! My husband and I started a private Facebook page for local Dakota County-based parents of kids with disabilities so we can stay in touch and do things together. We also administer an International IDIC15-specific group online with over 350 families, and another special milestones page just for Cody. There are many illnesses and symptoms associated with IDIC15, including seizures and sleep issues, but Cody has been fairly lucky so far. When you are among people who are experiencing similar things, you know they will be less likely to be judgmental when you are down, and more likely to be supportive so you can be “up” again soon with a little help from your friends.

Orion Associates is part of the resource network that I have pulled together to help me provide Cody with the best care possible. I went to a Consumer Support Grant meeting that I had to attend before requesting funding, and I received a list of service providers that included Orion. I chose them by chance, but have since been very grateful for the resources and support they provide. They come to the house on my schedule to help me figure out budgets, provide me with updates and just check in to see how our family is doing. It’s very hard to imagine navigating all of the paperwork without their help. Kathy is my go-to person at Orion Associates, and she returns my calls fast – usually within the hour. I found out how extraordinary that is when a friend who uses another provider came to me with a question because she couldn’t get an answer from her company! Kathy graciously provided me with the answer my friend needed.

Being the parent of a child with a disability requires a set of skills that few of us have, but we have to develop them. I’m here to tell you that building a network of support is not only good for your child, it is good for YOU. Find the people who will answer the phone when you call, give you a shoulder to lean on, and help you get up when you feel like you’ve fallen down. Take it from us, it makes all of the difference in the world!