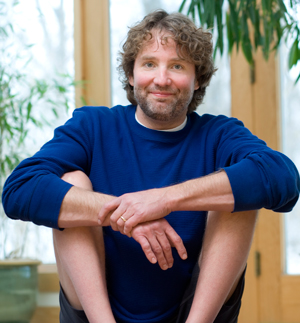 “Your body is the best home your mind will ever have.” – Matthew Sanford

Matthew Sanford believes that yoga can change your life. He should know because it changed his.

At 13 Matthew was paralyzed from the chest down after a devastating car crash that killed both his father and his sister. Matthew was not satisfied with the doctor’s advice to simply make the best of things by focusing on his upper body, ignoring his lower non-functioning body. He followed their advice for a while but always felt something was missing.

Matthew was introduced to yoga at age 25 when he was living in Santa Barbara and it changed his life. Yoga allowed Matthew to “feel” his lower body. He became aware of all parts of his body and learned to appreciate what his body could do instead of focusing on what it couldn’t do. This led to him teach adaptive yoga and eventually to found Mind Body Solutions, an organization that specializes in adaptive yoga for people with disabilities.

Matthew still remembers the first time he practiced yoga. The experience was so moving that it brought tears to his eyes. He was asked to separate his legs, something he hadn’t done in the 12 years since his accident. That experience made him realize even though parts of his body had no feeling, they could still be an important  part of his life.

Matthew’s believes that by deepening the mind body connection, the experience of living with a disability can be positively transformed. Yoga and the belief in the connection between the physical and the mind make  it easier to live with disabilities and improves one’s quality of life. Matthew teaches if you’re more connected to your body, you’re going to take better care of it, and that includes exercise.

All of these benefits ultimately lead to a greater sense of hope and a renewed sense of freedom.

Some of Matthew’s students have written testimonials on the tangible changes that have taken place. One person commented that after two years she can transfer out of her chair, and it now takes only five minutes instead of 20. Another student said that yoga eases his feelings of depression about his disability and feels that yoga is a tool that helps him cope.

In a recent Star Tribune article, the increase in popularity of Yoga was discussed as a non-traditional therapy to western medicine. Matthew Sandford is a part of this article and he talks about how yoga can benefit people of all abilities and help with a variety of medical and mental health issues.

Sanford, 47, is a public speaker, critically acclaimed author, founder of Mind Body Solutions, and a leading voice in the integrative health movement. ]

In Waking: A Memoir of Trauma and Transcendence, Sanford shares his philosophy on the power of the mind-body relationship.

Sanford teaches and keynotes at national yoga conferences and studios around the country; presents seminars to major health care organizations, including Mayo Clinic; and brings his unique and powerful message to corporations nationally.

Sanford was the 2010 recipient of the “Pioneer in Integrative Medicine” award from the Institute for Health & Healing at California Pacific Medical Center, one of the leading integrative medicine programs in the nation. In 2008,

Sanford was recognized as a national hero with a Volvo For Life Award.

Available on Amazon, Matthew Sanford and his non-profit, Mind Body Solutions developed, “Beyond Disability: A Yoga Practice with Matthew Sanford,” a seated-practice DVD that allows anyone living with a mobility issue to practice with the nationally recognized paraplegic yoga teacher. The DVD offers a combination of instruction and stories as Sanford and his students explore sensations such as grounding and balance in a seated practice for people of all abilities