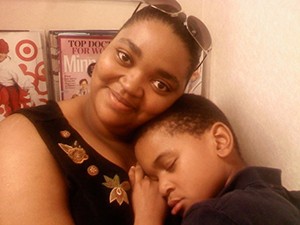 When my son Javon was 7, we met a little girl his age at a bar-b-q who asked him if he was retarded. He hesitated for a moment, then said confidently, “No, I’m autistic. My mom says that I communicate differently.”  They happily went off to play.

It took awhile to get to that moment of confidence and communication!  When he was diagnosed, my son’s autism was profound. He had limited communication skills, and had frequent meltdowns that made every trip out of the house an “adventure” waiting to happen. I couldn’t ever tell what would set him off. I was a single mother who was trying to make ends meet and hold a full-time job, but even the most understanding boss would be justified in questioning the hours I lost in going to as many as four doctor visits each week: occupational and speech therapy, neurologists and other appointments. There were also times where he had meltdowns at school and I had to go get him.

I was first evaluated to hire workers through a Personal Care Assistant (PCA) program, but I was worried about that. During some of his meltdowns he struggled against me and unintentionally hurt me. I know that it is the disease, not him, who occasionally lashes out, but could I trust anyone else to have a similar viewpoint?  Who was I going to find to not only handle him correctly, but to enrich his life?  I would still be juggling to make ends meet, AND be worried about my son all the time.

A PCA assessment nurse told me about the Consumer Support Grants (CSG’s) available through Hennepin County. That grant acknowledges that parents or other relatives who serve as caregivers to a disabled member of their family can be the paid for serving as the caregiver. Orion Associates was recommended to me, and I partially chose them because unlike other providers, they would come to my house to set things up. What a luxury it was to not worry about taking him with me and risking a public meltdown!

While I certainly wasn’t making the money that I had at a full-time job, having the CSG grant allowed me to research new training methods and treatments for autism, and gain far more insight into my son’s diagnosis and the ways that I could help him be more social and get along in the world independently. No two kids on the autism spectrum are exactly alike, but I learned so much by trying different things with him, learning from him about ways he could learn, and not giving up when something failed.

I looked into all kinds of other services for my son. One private teaching option that seemed promising was $325 an hour, which was not covered by insurance. It seemed crazy to consider given my struggles to pay the rent, utilities and grocery store each month. Instead, I did some research on university programs focusing on autism, and went to ask one of the professors if she knew a student who might want to help once in awhile. I ended up with a great intern who worked with my son a couple of hours a week, supplementing what I was able to do with him.

Today, my son is 11 and is able to talk to you and answer questions. He loves language, and has a huge vocabulary. I would love to find ways to overcome the obstacles he has in reading, because I know that he would enjoy that so much. I hold him to high standards, and expect good behavior. He knows that there are consequences to meltdowns, and now tells me that he “needs to go somewhere else for a few minutes” when he feels a meltdown coming on. It’s not perfect, but it’s so much better than it was.

I don’t know that anyone but another family dealing with autism could tell you that you live moment by moment, not day by day, with this disease and its complications. I could not do this without help, and the people at Orion are among those that are my essential partners. They are patient with me when I make an occasional mistake, and are helpful resources. Orion Associates, Hennepin County CSG, his school, the doctors at Park Nicollet, the young woman who came from the college to help me – all have been my partners in helping my son to be more social, more independent, and have greater fulfillment and self-esteem.

I heard a news report one night where someone was complaining that the CSG was a waste, “paying people to take care of their own kids.”  It really hurt me, because this has been such a challenge, and I’ve done my best for my son. Because I have learned so much, I want to be a resource for others. I was recommended to a two-year leadership course offered by the Northside Visitation Monastery of Minneapolis, and am soon going to be starting a support group for single parents of autistic children. There are so many people who are trying to do their best after an autism diagnosis, and they shouldn’t have to do it alone.